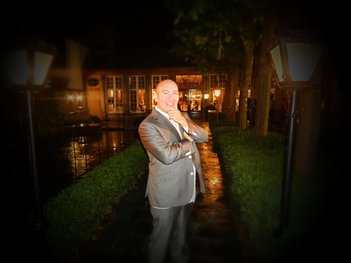 You are looking at a freelance designer.

Back in the 80’s my father was fascinated by the Rubik’s cube. Not too long after the Rubik’s Clock came on the market and I got one as a Christmas present. Approximately one hour later I had found out how to get all 9 clocks at 12 O’clock on both sides.

To learn the 3x3x3 Rubik’s Cube took me much longer but I enjoyed every moment of it, and these days I enjoy it even more. I want to get faster and faster in solving this cube. My personal record is still not what I think it should be, my P.R. was 44.165 seconds.

So far I was only playing with and collecting new brainteasers.

It all became more serious when a colleague of mine, Gilbert D., who has the same hobby as I, brought a large portion of his puzzle collection with him to work. Every day during break time I either found the solution of a puzzle, or I took it home with me and the next day the puzzle would be brought back solved.

After a while he said that I'd better start designing puzzles myself because I'm so good at solving them. That had not fallen on deaf ears and one thing led to the other. Not much later I invented my ten-pointed star. With ten five-pointed stars, you get a ten-pointed star.

I had invented the symmetrical combination with the four different five-pointed stars and I wanted to market it. Together with a childhood friend this has happened. When we were younger we said that we would be going into business sometime and it came true.

We took out several patents, both on the pieces themselves and on the ten-pointed star as well.

2 x 10 000 boxes were produced, it was made in China by Arts of Games and distributed by 3D Eureka puzzles. Unfortunately, sales were meager and the cooperation between my best friend and I suffered greatly because of that. The website, www.pentadivio.eu, unfortunately went offline at that time, but I'm going to put some information back online using my YouTube channel. I decided to end the business collaboration and we went our separate ways and stayed friends.

With my passion for puzzles I continued designing and developing new puzzles.

The diamond puzzle, another star-puzzle and now One in a Row were good enough to be taken under license by the firm Philos.

I also got an interest in twisty puzzles and I started collecting them and studying many of the kind. A lot of twisty puzzles have no secrets for me anymore, so I started to design modified puzzles. Maybe soon more of my puzzles will find the way to the market, but right now I can’t go deeper into that subject.

I’d say: keep following me on YouTube or my website where I will update when there are new developments.

My sincere apologies for possible inconveniences.